Version Two is a media agency committed to helping brands create content that converts and drives performance through native advertising.

Gaio’s Knauermann products stand for uncompromising quality and simple operation. The Knauermann satisfaction guarantees security when purchasing and a 15-day non-binding test option, but above all outstanding customer service. 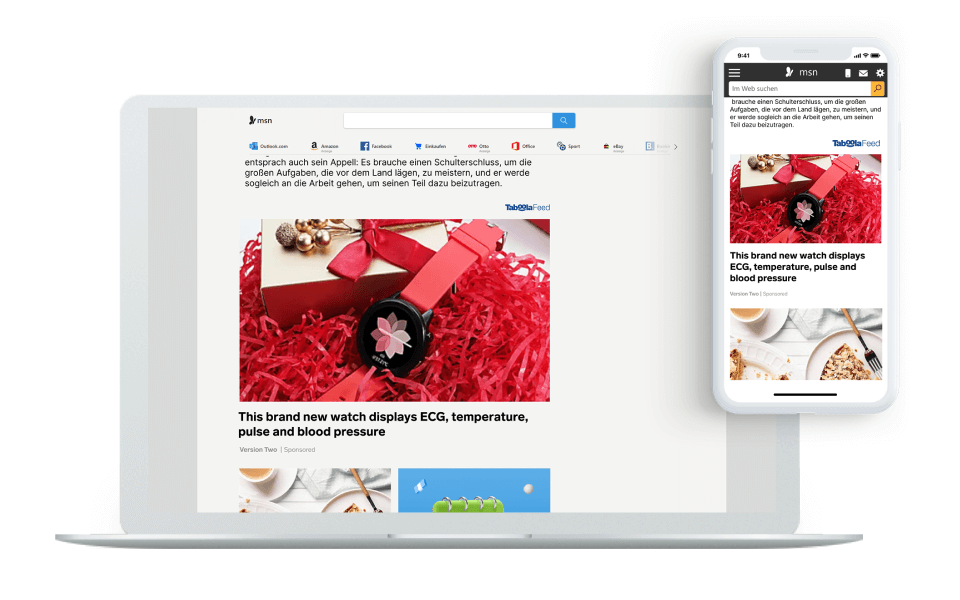 Ahead of the holiday season, Version Two was working with smartwatch development company Gaio to launch Knauermann, a new brand of fitness watches specializing in health tracking aimed at over 40s. And they were ready to move beyond over-saturated channels like Google and Facebook.

Version Two helped Gaio launch native Image Ads — consisting of an image, headline and description — across Taboola’s network of top-tier, vetted publisher sites. In fact, the agency was able to use historical performance data to only target audiences across the highest-performing publishers to generate the greatest ROI. They also geo-targeted German-speaking audiences in Germany, Austria, and Switzerland.

Campaign creatives were carefully selected to maximize engagement. Images, for example, were purposefully not studio produced so that they’d feel more genuine and accessible, and also included close-up shots of products.

Those who clicked through were taken to custom landing pages or product pages designed just for this native campaign, where they could customize the look and feel of a watch. Data on the best selling customizations was then fed back through Version Two’s creative suite, where they used these consumer-customized designs as campaign images to further uplift conversion rates.

Version Two launched their Taboola campaigns in November. By Christmas, the agency generated a 3.5x ROAS and 400x increase in daily revenue for Knauermann from these native ads. Since Knauermann had no other campaigns or traffic sources leading to its new e-commerce store, all holiday revenue was attributable to Taboola.

Version Two is now running Taboola campaigns for multiple Gaio watch brands. The agency will continue using native ads to increase revenue and acquire new customers at scale – not just during high-traffic seasons but also through the year. To date the Taboola activity has driven over €3million of revenue for Gaio brands.

“We launched a holiday marketing native advertising campaign on behalf of Gaio across Taboola’s network of premium publisher sites. The Version Two team worked closely with them to optimize their creative and targeting strategies to launch a campaign in November, meeting the holiday rush. By Christmas, we had generated a 3.5x return on our ad spend. We’re now scaling Taboola Ads across multiple brands to continue increasing revenue from native campaigns.”