VAHA, is a smart fitness mirror that helps people create a routine that makes them feel good.

VAHA is the smart fitness mirror that offers you individual sessions for body and mind. In your home. The VAHA fitness mirror helps people create a routine that makes them feel good. Set goals, get instant feedback and find the perfect challenge. It features live and on-demand courses and 1: 1 personal training and individual exercises. 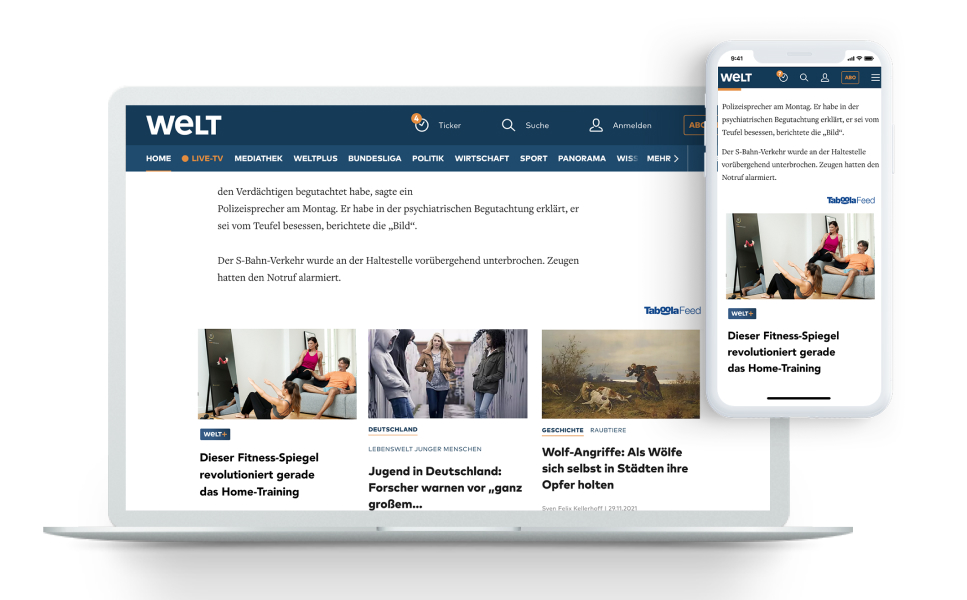 VAHA Drives a High Volume of Engaged Traffic to their website, Reaching Engaged Audiences at Scale

VAHA was looking for new ways to reach highly-targeted audiences at scale to drive more sales for their smart fitness mirror. They were looking for channels outside of search and social to find audiences that they had not reached before.

Working with Taboola, VAHA launched a sponsored content campaign with the goal of driving 30-day product trials at scale, while reaching people on premium publisher sites in their targeted regions.

Eventually, they found that Taboola’s audiences were so high quality that even without offering a 30-day trial promotion and bundle deal with a nutrition partner, they were able to drive the similar results.

Working with Taboola, VAHA saw a between 81 and 142% lower CPC than search and social channels and a 10% lower bounce rate than the site average. Overall, Taboola brought VAHA a 338% increase in engaged site visits since January 2021.

In order to optimize their campaigns, VAHA leveraged Taboola’s Smart Bid, automated bidding platform, designed to improve advertiser campaign performance instead of manual bidding. For each impression, Smart Bid uses campaign and Taboola’s network conversion data to predict how likely a user is to convert and adjust the bid accordingly.

They found Taboola to be a strong top of the funnel channel which contributed heavily to conversions on other channels.

VAHA pulled attentive audiences from Taboola traffic campaigns and retargeted them on search and social sites.

An attentive audience is a group of users that have spent a significant amount of time on an advertisers website, but haven’t yet converted. Customer behaviors such as number of recurring visits, time spent on site etc. are measured by Taboola’s algorithm, and the strength of these behaviors are used to define an attentive audience specific to an advertiser’s campaign.

Using this strategy, VAHA was able to achieve a 2x increase in conversion rate across all channels.

“We’ve found Taboola to be a strong source of new potential consumers at scale. Working with Taboola sponsored content and attentive audiences, we’re ultimately able to increase the number of conversions across all channels.”