Find new, innovative ways to reach pet-lovers looking for healthy food in the UK at scale, outside of search and social channels.

Use Taboola High Impact to distribute pet-centric video creative in premium placements on top publisher sites across the open web.

Lily’s Kitchen exists to make pets’ lives better by inspiring pet parents to feed pets properly, and have fun doing it. As a B Corp, it is dedicated to using business as a force for good, and with People, Pets and Planet at the heart of everything it does, it is on a mission to help as many dogs and cats around the world tuck into its proper food. 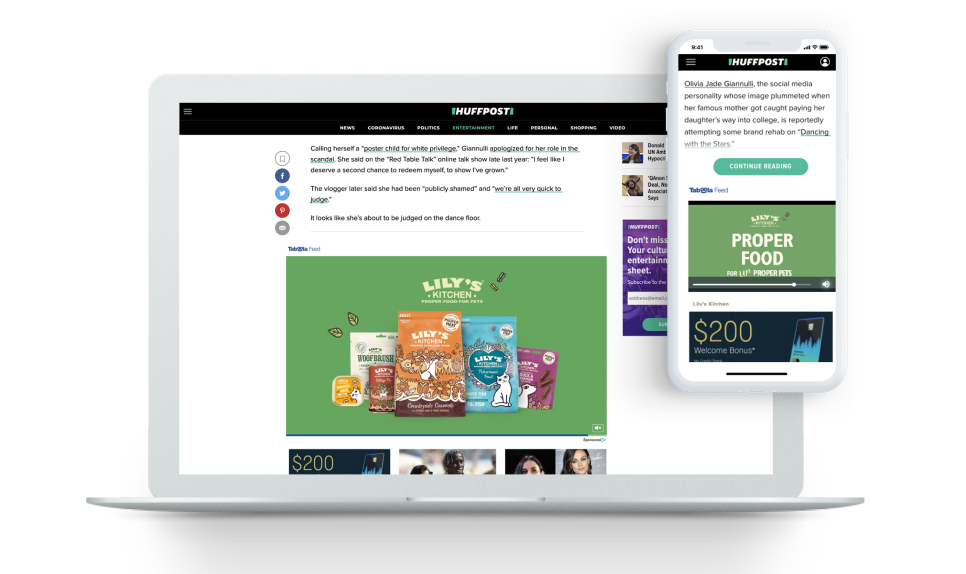 Lily’s Kitchen wanted to reach pet owners in the United Kingdom, outside of search and social channels, to meet its brand awareness goals and scale its audience. Lily’s Kitchen turned to Taboola to launch a pet-centric video campaign.

Lily’s Kitchen distributed its video campaign using Taboola High Impact, fueled with lifestyle-driven creatives that put its consumer’s pets at the center of its marketing.

Ads will only run on homepages, mid-article placements, and the very top of Taboola Feed. Formats include video ads, rich media ads, and social media-like carousel and story ad formats.

Lily’s Kitchen tested 15-, 30- and 40-second video creatives at the top of the Taboola Feed or mid-article with the Taboola High Impact solution, and received over 1,167,648 completed views since launching in January. vCTR increased by 9% from February to April of this year, and completion rate increased by 14% between April and August of this year.

Lily’s Kitchen looks forward to expanding its relationship with Taboola by implementing full-funnel campaigns across the UK.

“Lily’s Kitchen is always looking for new and innovative ways to reach new audiences at scale, to connect more pet lovers with wholesome food for happy, healthy cats and dogs. Taboola High Impact allowed us to reach new audiences outside of search and social channels, using premium placements that put our proper food for pets front and centre for our intended audience.”