Work with Taboola to promote AIROW™ using video, in the Taboola Feed and High Impact placements, allowing Tadiran to access audiences in premium placements like homepage, mid-article and top of Taboola Feed on premium publisher sites.

With Taboola Video, Tadiran saw 40% of all campaign leads and 68% percent of all website traffic come from Taboola. After Taboola’s best practice recommendations, CTR increased by 100%.

They believe everyone deserves clean air. It impacts wellbeing, health, and even the ability to sleep soundly at night. The quality of the air we breathe is essential and it’s at the foundation of all Tadiran does. Today, indoor air is five times more polluted than outdoor air. Tadiran is dedicated to making sure that people feel safe about the air they breathe — at home, school, or work, no matter where they live.

For over 60 years, Tadiran has applied their engineering knowledge to the development and manufacturing of world class air conditioners. Now, Tadiran is putting their air expertise to work to create patent-proven air quality technologies that are easy to use – because there is nothing more important than air. 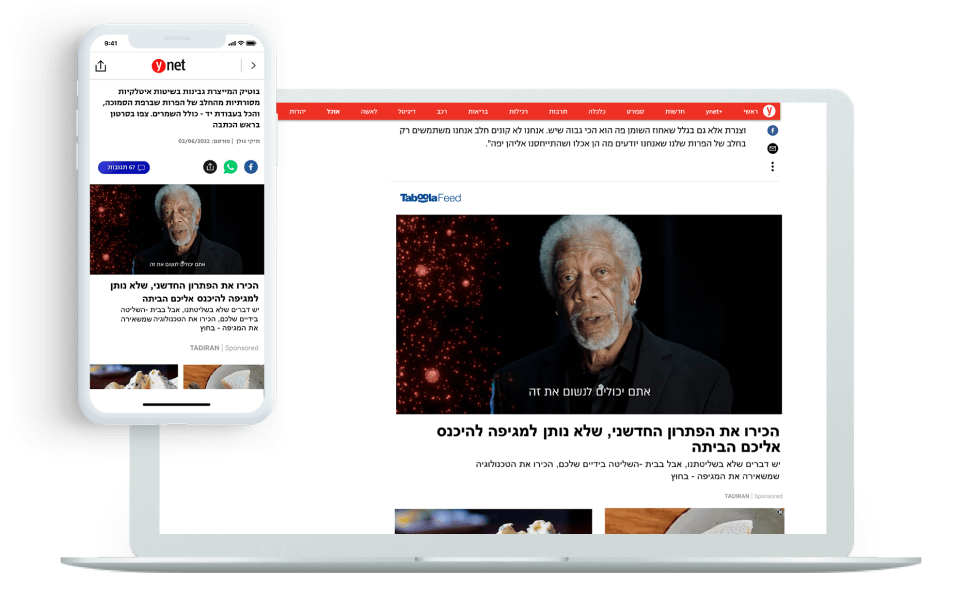 Tadiran wanted to find new and innovative ways to educate consumers about their newest technological advancement — the AIROW™ — which is able to reduce 99.99% of the viruses including Coronavirus in enclosed spaces.

In order to accomplish this goal, they worked with Taboola to distribute a video campaign which ran in places like the Taboola Feed and Taboola’s High Impact allows advertisers to raise brand awareness in environments surrounded by professionally produced editorial content in placements like the homepage, mid-article and top of the Taboola Feed.

The success of this campaign was initially measured by awareness key performance indicators (KPIs) like viewability and completed views, alongside engagement metrics such as visible click-through-rate (vCTR). With that, Tadiran also saw a large amount of leads as a result of their Taboola campaign.

Taboola was a part of a larger media mix for Tadiran’s campaign, which also included platforms like Google and Facebook. Taboola drove 40% of the campaign’s overall leads, and was the top performing channel for Tadiran.

In addition, 68% of all website traffic from the overall campaign came from Taboola. Those site visitors stayed on Tadiran’s site for an average of 01:59 minutes, which was 30% higher than other platforms.

While Tadiran’s video campaign was still in flight, the Taboola Creative Shop made several recommendations regarding headlines and video descriptions, to align with the Taboola platform best practices.

Initially, Tadiran’s video was a bit longer than recommended, and their headlines weren’t directly speaking to their unique selling point — their new technology. After working with the Taboola Creative Shop to shorten their video and make some changes to their headlines, their CTR improved by 100%.

Their videos achieved a viewability rate that was 1.5x higher than average on mobile devices, and overall, they reached 6.4 million impressions.

“We were excited when we saw that Taboola High Impact video not only moved the needle on brand awareness KPIs, allowing us to educate the market on our new technology, but also drove the majority of leads across all channels — including search and social.”