Multinet Up, established in 1999, was founded as a Turkish meal card company that has evolved into a leading fintech brand. Their agency ALM Corp provides digital marketing services to over 1000 consultants and agencies globally.

Drive qualified leads from companies looking to sign up for their services.

Multinet Up was established in 1999 as a meal card company for businesses, and it has evolved into one of the leading fintech groups in Turkey. Multinet Up offers a virtual payment infrastructure to help companies manage employee-related expenses such as meal cards, fuel, flexible fringe benefits, rewards, travel, and accommodations. Its ecosystem includes over 200,000 institutions, 2 million card users, and a range of branded solutions including MultiPetrol, MultiGift, and MultiTravel.

Founded in 2000, ALM Corp is a leading Canadian agency, providing digital marketing services to over 1000 consultants and agencies globally. With a commitment to service excellence across the e-marketplace, ALM Corp harnesses the latest tools and methodologies to help consultants capture new customers and retain their current ones. 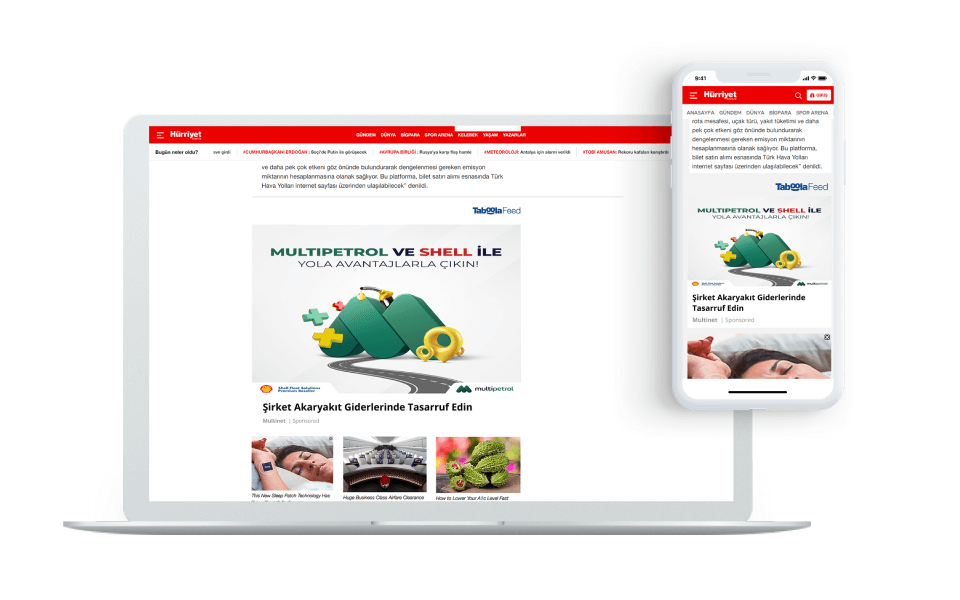 Multinet Up and ALM Corp were already running B2B campaigns to reach companies who might be interested in signing up for their services — particularly the Multinet Up meal card and MultiPetrol fuel service. To get ahead of competitors and drive qualified leads, however, they needed a new strategy.

Together, they launched a campaign including image ads and motion ads across Taboola’s extensive network of premium publisher sites, reaching audiences on desktop and mobile. Image ads include an engaging thumbnail and headline. Motion ads include visuals that move for up to 15 seconds, and look like a GIF. They’re designed to be eye-catching and improve advertiser campaign results. Multinet Up further complemented its ads with descriptions, which offer more information pre-click, and call-to-action (CTA) buttons, which drive users to complete a specific post-click action.

Multinet Up and ALM Corp also built custom ads to use Taboola’s Attentive Audiences feature. With Attentive Audiences, advertisers can target specific groups of users that have spent a significant amount of time on their website, but haven’t yet converted. Customer behaviors such as number of recurring visits, time spent on site, and more, are measured by Taboola’s algorithm, and the strength of these behaviors are used to define the right Attentive Audience for each advertiser’s campaign.

With this new campaign structure, Multinet Up and ALM Corp saw a significant boost in performance.

Their qualified lead rate for retargeting campaigns promoting MultiPetrol services increased from 72% to 92% in just one month. Meanwhile the cost per lead decreased by 49% and the conversion rate increased by 75%.

“We were running B2B campaigns, directing potential customers to blogs and editorial content related to our services. Then we worked with Taboola to change our campaigns structures and retarget already engaged audiences with lead-generating landing pages. As a result, our qualified lead rate increased from 70% to 92% in just a month.”