Increase engagement and revenue on traffic coming from news apps and social media channels while maintaining a high-quality user experience.

Implement a continuously scrolling Taboola Feed, including in-feed video, and features like Next Up and Read More.

KSR was founded in Sydney, Australia in 2016 and is managed by Knowridge Group. KSR aims to connect the science community with the public in order to help people gain knowledge and live better.

To achieve this goal, KSR selects and publishes the most innovative and inspiring research news from universities and research institutes worldwide. 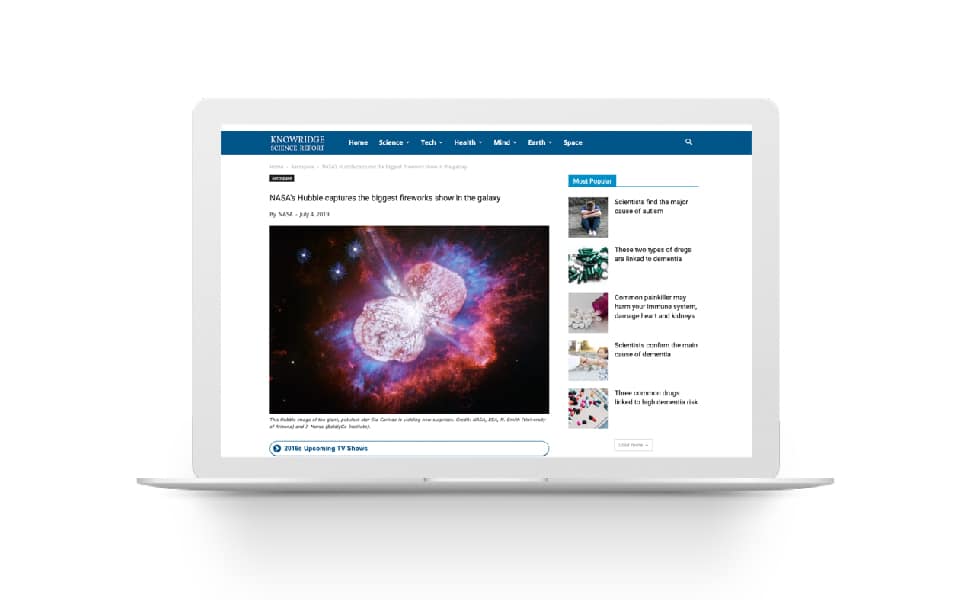 Reader engagement from these channels, which KSR measures using CTR, is lower than organic sources.

Before implementing Taboola Feed, KSR was looking for a solution to decrease their bounce rate and keep readers from these channels on-site for longer. They were eager to improve both RPM and CTR.

KSR Uses a Variety of Taboola Features to Increase CTR and RPM, Including Next Up and Read More

In order to enhance reader experience KSR uses Taboola’s Next Up and Read More features.

KSR finds Read More feature incredibly valuable, as it greatly contributed to the increase they saw in CTR. The feature is implemented on pages where traffic is mainly referred from news apps and social media channels. On these pages, CTR is 7% on average, with a $16 RPM.

Taboola’s Read More feature increases visibility and revenue in two distinct ways—including a Read More call to action above Taboola Feed drives higher monetization and engagement for visitors likely to, while letting others read the full article. This feature requires no development work on the part of the publisher.

In addition, Next Up works to re-engage users before they bounce by surfacing recommendations above the fold in a sticky slider unit.

Taboola really surprises us with their brilliant products and their professional account management team. We did expect to see some increases in major metrics when we started using Taboola Feed, but we never thought the growth can be so fast and so strong. With Taboola as our advertising partner, we believe our website will be bigger and better. We hope our experience with Taboola can help other publishers achieve their goals.