It’s Lifeboost’s belief that you should put the cleanest coffee that you can find into your body. For that reason, they use a process called TrustPure, their roadmap for finding the healthiest, tastiest, stomach-friendly beans on the planet. 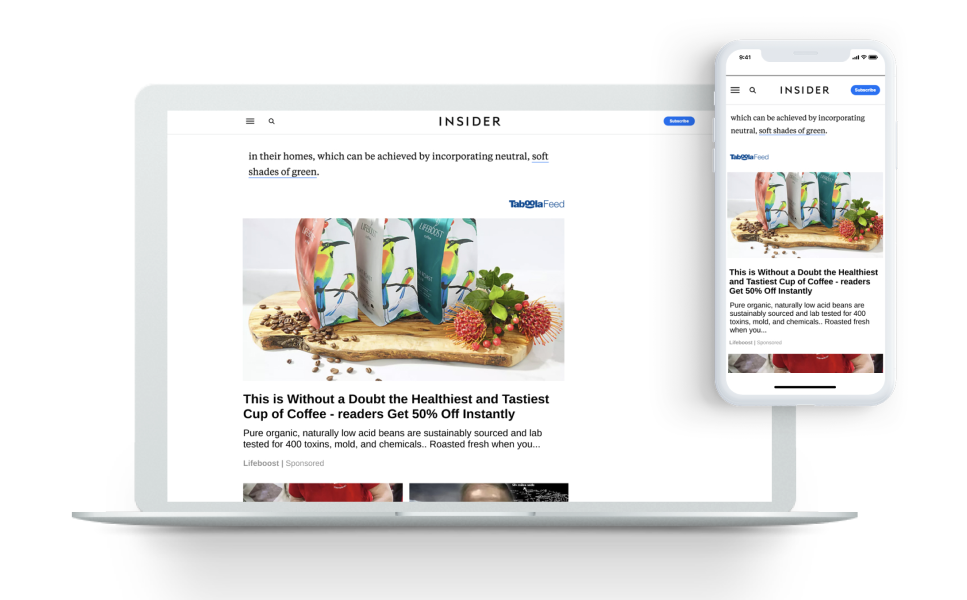 Originally, Lifeboost wanted to use Taboola’s reach on the open web to support top of the funnel prospecting efforts, but soon realized that Taboola’s high quality audiences were also converting at a higher rate than search and social platforms.

In response, Lifeboost repurposed creatives that were already working on Facebook and Google to launch a sponsored content campaign with Taboola.

Lifeboost chose to leverage Taboola’s call-to-action (CTA) button and description options within their sponsored content campaign in order to capture more relevant people at scale. The use of descriptions AND CTA button increased conversion rate by 11%. Their campaign targeted a broad audience in the US, and sent those interested to a long-form landing page with information about Lifeboost Coffee’s TrustPure process, and offers for a variety of different coffee bean products.

Lifeboost also wanted to re-engage those people who may have shown interest in their products, but hadn’t yet made a purchase.

Taboola’s retargeting and Attentive Audience targeting features allowed them to re-engage with people who had integrated with either their Taboola campaign, or visited their website in the past.

In order to leverage these features, Lifeboost installed the Taboola Pixel on their landing page, allowing them to retarget users who had previously visited their site.

Attentive Audience campaigns focus specifically on a group of users that have spent a significant amount of time on a website, but haven’t yet converted. They take into account customer behaviors like number of recurring visits, time spent on site, and more, which are measured by Taboola’s algorithm. The strength of these behaviors are used to define an Attentive Audience specific to an advertiser’s campaign.

In order to bid as efficiently as possible, Lifeboost used Taboola SmartBid, Taboola’s automated bidding platform. For each impression, SmartBid uses campaign data, and Taboola’s network conversion data, to predict how likely a user is to convert and adjust the bid accordingly.

Lifeboost looks forward to continuing to work with Taboola in the future.

We originally wanted to work with Taboola to bolster our prospecting at the top of the funnel, but soon realized their audiences were converting for us at scale — and at a much lower cost than on search and social channels. We look forward to continuing to work with Taboola as a critical part of our media mix.