Kia’s purpose is to deliver innovative products that inspire you when you move and deliver convenient and meaningful services demonstrating our commitment with everyone’s most valuable resource, your time.

Find a native solution to add to Kia’s media mix in support of a brand awareness campaign focused on sustainability and carbon neutrality, with less limitations on the number of seconds a video would be exposed to a viewer than search and social platforms.

Work with INNOCEAN and Wisebirds to launch a Taboola Video campaign across premium news sites, online magazines, blogs and other digital properties in the US and Korea.

In the US, Kia was able to achieve a 171% overall uplift in unaided brand awareness; 200% for females between 18 and 54. They also increased brand affinity by 26% for the same audience, and increased video completion rate by 30% in Korea.

As designers of movement, with the vision to create sustainable mobility solutions for the consumers, community, and the global society, Kia’s purpose is to deliver innovative products that inspire you when  you move and deliver convenient and meaningful services demonstrating our commitment with everyone’s most valuable resource, your time.

They were born in a place of inspiration, passion and enthusiasm. Their mindset of growth and progress vibrates among all Kia employees around the world, who are committed to delivering their brand purpose to you every single day. 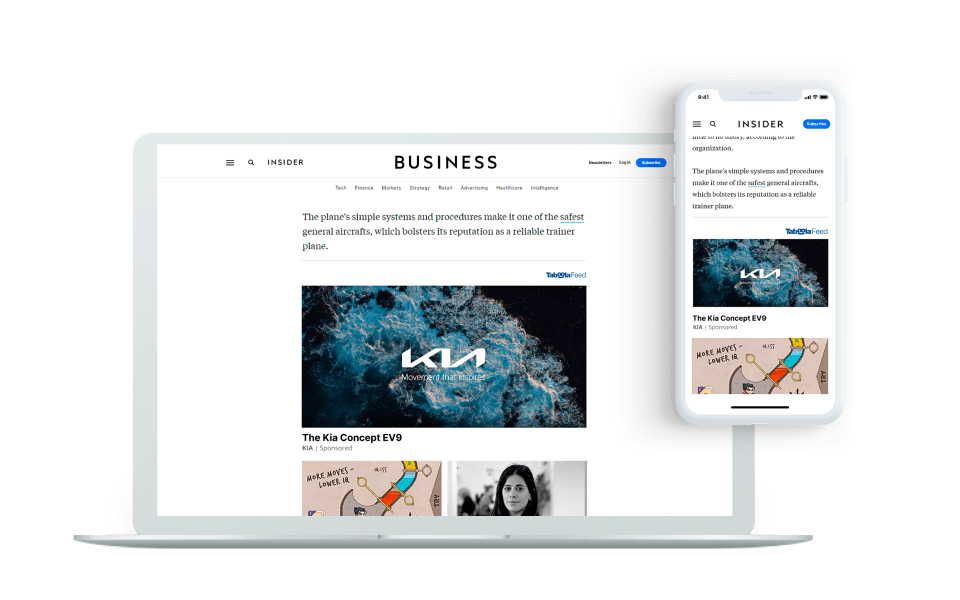 Kia was looking to increase brand awareness in the United States (US) and video completion rates in Korea. They worked with INNOCEAN to spread awareness of Kia’s sustainability and carbon neutrality initiatives using Taboola Video. INNOCEAN worked with Wisebirds to determine which media was best to purchase for the campaign.

Social media and search channels are typically the main focus of Kia’s digital campaigns, but they wanted an additional native solution that had less limitation on the number of seconds a video would be exposed to a viewer.

INNOCEAN worked with Wisebirds to run Taboola Video campaigns in the US and Korea, which would allow them to promote longer video creatives across premium news sites, online magazines, blogs and other digital properties across both countries.

In the US, Kia measured meaningful brand lift indicators using a brand lift study*, to see whether or not those who watched the Taboola Video could recall the Kia brand afterwards. To do so, they worked with the Taboola Creative Shop and Kantar.

The campaign was specifically impactful for females, ages 18 to 54, 26% of whom showed a strong positive affinity for the Kia brand after watching their ad. Kia saw a 127.27% uplift in unaided awareness and a 77.24% uplift in online ad awareness with the same demographic.

Although Kia already has above-average brand recognition in the US automobile market, Taboola was able to further improve that recall. Kia was able to achieve a 171% overall uplift in unaided brand awareness.

In Korea, Kia worked with INNOCEAN and Wisebirds to run a retargeting campaign for viewers that had completed watching 63-second or 100-second videos, which was successful. Kia was able to achieve high-quality video views at scale, with a high completion rate, at a relatively low price. Taboola increased video completion rate by 30% in Korea for Kia.

*About Taboola’s Sponsored Brand Lift Studies
Taboola offers brand lift studies to some brands and customers looking to achieve awareness objectives. They provide deeper insight into the effectiveness of a Taboola campaign by measuring the impact of band awareness and predisposition metrics. The studies are conducted through Kantar (previously known as Millward Brown), the world’s leading data, insights and consulting company.

“Taboola is a powerful native video advertisement to be included in our media mix for branding campaigns. With Taboola, we were able to increase brand favorability in countries where we’re already well known, at a price that worked for our needs.”

Xaxis and Taboola join forces to achieve incredible results from a leading educati...

Navarang Asset Sells Their Most Expensive Luxury Property in Just One Month with T...