By working with Taboola and Adjust, Zupee was able to achieve a 25% lower CAC than target, and drove 100,000+ app installs.

Zupee’s mission is to improve people’s lives by bringing happiness to them through games that are familiar, offer fair competition, and recognition to the players. Their games include Zupee Gold, Ludo Supreme, Ludo Ninja, and Snakes and Ladders. All of their games uphold their values for transparency and fair play, ethical practices and security and putting the user first.

Adjust is an analytics platform that helps marketers grow their mobile apps with solutions for measuring and optimizing campaigns and protecting user data. They have all the features advertisers need to successfully scale — and provide responsive global support. 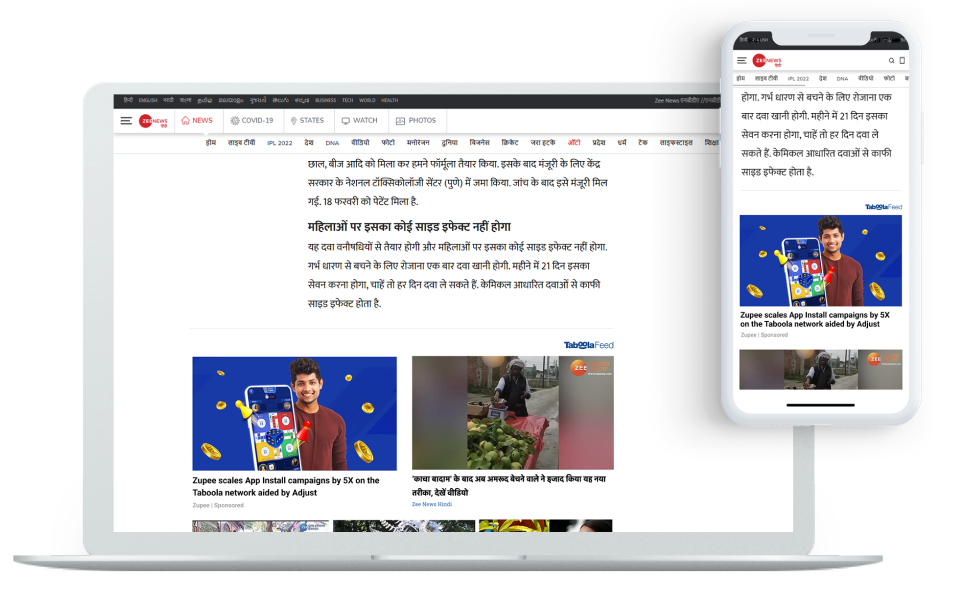 Zupee used Taboola’s 15-second motion ad format, and sponsored content to reach new users at scale on premium publisher sites across the open web. They found the users acquired through Taboola to be of high quality, and were also impressed with their high retention rate, and low fraud rate.

In order to optimize their campaigns, Zupee used Taboola SmartBid, Taboola’s automated bidding technology, which uses campaign and Taboola’s network conversion data to predict how likely a user is to convert for each and every impression. Zupee also used Taboola’s geotargeting and zip code targeting capabilities to reach users in relevant locations. Furthermore, Adjust post back data helped Taboola to define a clear conversion goal, to build a strong machine learning and AI component, and to optimize campaign performance for better ROI.

Adjust chose to work with Taboola on behalf of Zupee to support new user acquisition goals for Ludo Supreme Gold, Ludo Ninja & Snakes and Ladders Plus. They needed to achieve incremental reach and optimize towards key performance indicators (KPIs) at the bottom of the funnel like CAC, ARPU and ROI.

The team at Zupee noticed that their organic traffic was not growing, and that they were unable to isolate where this traffic originated. This was because multiple ad networks were distorting into organic traffic numbers via click flooding and spamming. Zupee started comparing the rejected install rate patterns with the data received from ad networks and found that many of them had rejected install rates as high as 30%.

In order to find a solution, Taboola partnered with Adjust to detect and eliminate fraudulent activities in real-time and prevent fraudulent installs, keeping datasets clean. They began to optimize campaigns at a subpublisher level. Adjust enabled them to identify the right channels in order to optimize marketing spend towards the channels proving return on investment (ROI). Overall, Zupee has improved and scaled user acquisition by 25% with the help of Adjust attribution.

The partnership between Taboola and Adjust has been crucial in helping the Zupee team to maintain cost efficiency and improve ROI. In addition to enabling the analysis of marketing spend and user performance at the button of the funnel to get a better sense of the performance of partners and sources, Adjust fundamentally provides insight into Taboola’s attribution data. The attribution waterfall reveals which attributions were click-based, and which were influenced by other sources, helping Zupee in making strategic decisions about where to allocate marketing spend to drive the best quality users to their app.

The Sales & AM teams at Taboola & Adjust worked tirelessly to deliver the best solutions for their campaigns. They ensured seamless integration for Zupee, which gave access to premium publisher supply, continuous user quality & immense scale.

“Taboola’s direct S2S integration with Adjust helped in defining clear conversion goals, and postback data from Adjust helped Taboola to optimize campaigns for better ROI. We easily defined the demand for our campaigns with the help of audience, geo, and SmartBid capabilities to achieve our CAC, ARPU and ROI targets.”