Tnuva Group is the largest and leading food group in Israel. Tnuva has been operating for 90 years, bringing to every household in the country fresh dairy products, eggs, and additional fresh farm produce. Havas Blink is Israel’s first and largest content and social media agency.

Work with Blink to launch a Taboola campaign leveraging Motion Ads and CTA Button ad formats to promote a minisite for consumers to receive two yogurts for free.

With Taboola, Blink was able to help Tnuva achieve a 40% market share for Tnuva Go Yogurt products in just two weeks at a CPA 87% lower than the target using Motion Ads. Tnuva sells new GO Yogurt product to audiences at scale with Taboola

Tnuva Group is the largest and leading food group in Israel. Tnuva has been operating for 95 years, bringing to every household in the country fresh dairy products, eggs, and additional fresh farm produce. Tnuva’s historic and distinctive logo has become an emblem signaling products that are made with care, and to the highest standards of quality, taste and freshness.

For nearly a decade, Tnuva’s classic dairy products and non-dairy treats have won the hearts of Israel families seeking balanced and tasty foods with high nutritional value. The company invests heavily in research and development, ensuring that products meet the highest standards of quality controls.

Havas Blink is Israel’s first and largest content and social media agency. The company was founded in 2007 by Sagi Hametz, who serves as a managing partner. Sagi was among the founders of The Marker and served as editor of the magazine. Adva Kirsch serves as the Company’s CEO and has been in the company for six years. Havas Blink has 35 employees and serves approximately 50 of the largest clients in the Israeli economy. 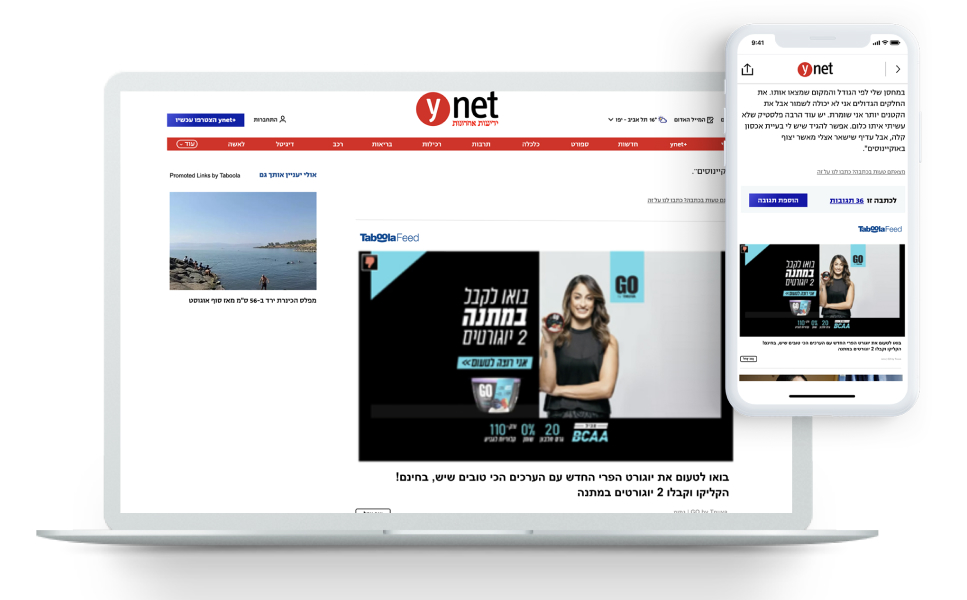 Tnuva launched a performance campaign to promote GO Yogurt for trainees in July of 2021. They were looking to reach high-quality audiences at scale, with the goal of ultimately driving sales amongst a relevant group of consumers. In order to attract a larger group of consumers.

Tnuva worked with Blink to launch the campaign with Taboola, using Motion Ads across premium publisher sites in the region. The campaign ran for two weeks, and resulted in a 40% increase in market share.

Working with Taboola, Blink and Tnuva’s campaign was able to achieve a CPA that was 87% lower than Tnuva’s goal, increase the vCTR by 11% and increase CVR by 26%. Blink leveraged Taboola’s Smart Bid and the Taboola Pixel to optimize the campaign during flight.

Smart Bid is Taboola’s automated bidding platform, designed to improve advertiser campaign performance instead of manual bidding. For each impression, Smart Bid uses campaign and Taboola’s network conversion data to predict how likely a user is to convert and adjust the bid accordingly–all to maximize the number of conversions.

The Taboola Pixel allows you to understand the actions people take on your site and to optimize your marketing campaigns towards desired and valuable actions. When visitors on your site perform a certain action, the Taboola Pixel can be activated to report that action.

Taboola’s CTA Button is a creative add-on available to increase conversion performance of campaigns across Taboola. The CTA appears as a button alongside the creative, and is designed to catch the attention of users and drive them towards a specific post-click action based on the campaign KPI.

“The new Tnuva GO product line offers the perfect combination of excellent taste along with top nutritional value. Once taste tests proved the Israeli consumers preferred GO yogurt over our competitor’s offering, we decided on a tasting strategy, providing online vouchers for a tasting kit. We assumed once consumers will taste our product, they will choose it over our competition, which is exactly what happened. A prominent ad campaign, along with a tasting kit for a winning product, created the exact result we were hoping for.”