The Motley Fool is a multimedia financial-services company dedicated to building the world’s greatest investment community.

Scale the number of leads and subscriptions driven each quarter without increasing cost per acquisition (CPA).

Implement Taboola Attentive Audience retargeting to reach a specific set of users that were highly engaged with The Motley Fool’s website, but haven’t yet converted.

With Taboola, The Motley Fool was able to generate 25K leads per quarter and 400 subscription sales in just three months, while decreasing CPA by 11%. The Motley Fool lowers cost per acquisition by 11% with Taboola attentive audience targeting.

Founded in the US in 1993 by brothers David and Tom Gardner, The Motley Fool is a multimedia financial-services company dedicated to building the world’s greatest investment community.

The company’s name was taken from Shakespeare, whose wise fools both instructed and amused, and could speak the truth to the king — without getting their heads lopped off.

Along with our U.S., UK, and Australian businesses, they reach millions of people each month through our websites, books, newspaper columns, television appearances and subscription newsletter services. The Motley Fool champions shareholder values and advocates tirelessly for the individual investor. 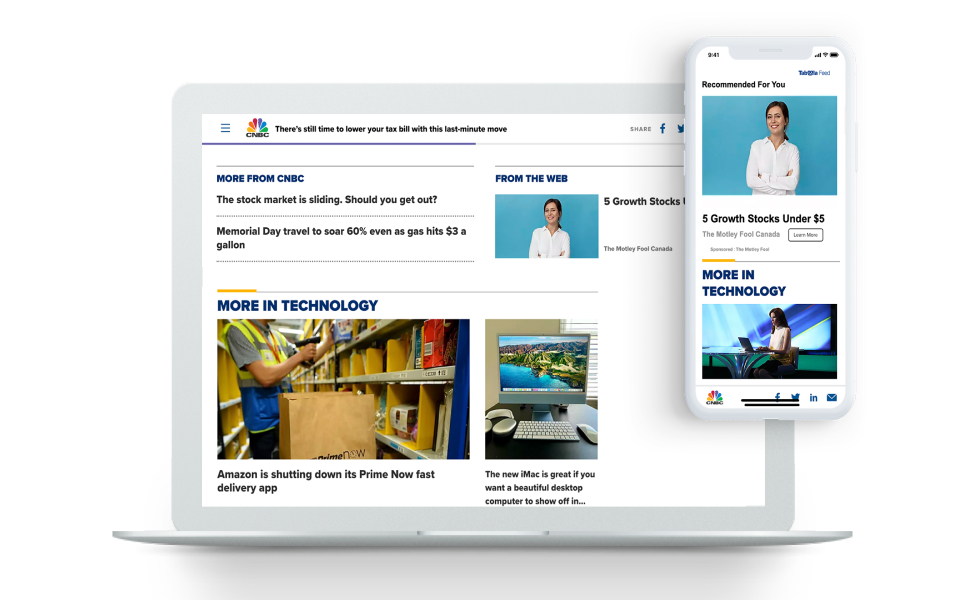 The Motley Fool was looking to find new ways to reach potential customers at scale, through the distribution of editorial content on editorial sites across the open web with Taboola.

In order to reach those consumers, The Motley Fool circulates editorial landing pages with headlines like, CEO Says This Is Worth “35 Amazons”, and “5 Growth Stocks Under $5,” in order to attract people interested in learning more about how to make smart investments.

In order to scale the number of emails captured, and ultimately sales through their campaigns, The Motley Fool implemented Taboola’s Attentive Audience feature in order to activate advanced retargeting.

While regular retargeting campaigns target any person that has previously interacted with an advertiser’s website, Taboola’s Attentive Audience feature retargets those who have spent between 60 and 90 seconds on a site, signalling a high amount of interest.

An attentive audience is a group of users that have spent a significant ample time on your website, but haven’t yet converted. Taboola’s algorithm selects those users based on customer behaviors such as number of recurring visits, time spent on site,
scroll depth, and the number of pages a user visited within a session. The strength and depth of these behaviors are used to define an attentive audience specific to an advertiser’s campaign.

“We’re incredibly impressed with the retargeting capability that Taboola offers with their Attentive Audience solution. In just a few months, we were able to attract many leads at a high volume, all while lowering our overall CPA.”